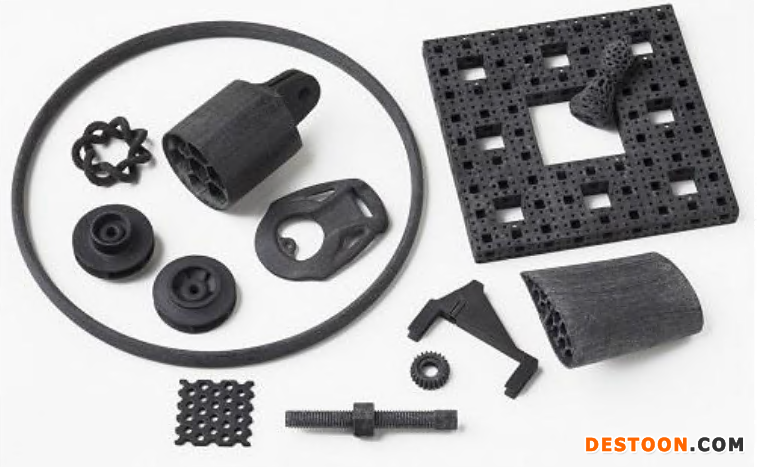 After years of research, Illinois-based Impossible Objects has begun commercializing its composite-based additive manufacturing (CBAM) process. In CBAM, a binding material is deposited onto sheets of reinforcement material before it is flooded with thermoplastic powder, which sticks only to the binding material. The powder is subsequently blown or vacuumed off. All that remains is the plastic matrix on a sheet of reinforcement fiber.

The same process continues layer by layer, with these sheets stacked one atop of the other. The stack is ultimately compressed and moved into an oven that melts the plastic matrix together. once the object is removed from the oven, the excess matrix material is removed using a chemical bath or sand plastic, leaving the final object.

Reinforcement materials range from carbon fiber and fiber glass to polyester, polyvinyl alcohol, PLA and even silk and cotton. The variety of matrix material is potentially much wider than other 3D printing processes, due to the fact that the powder is not melted when initially deposited. For the moment, the company has demonstrated the use of PEEK and Nylon 12, but is developing an elastomer for use in CBAM, along with other materials. 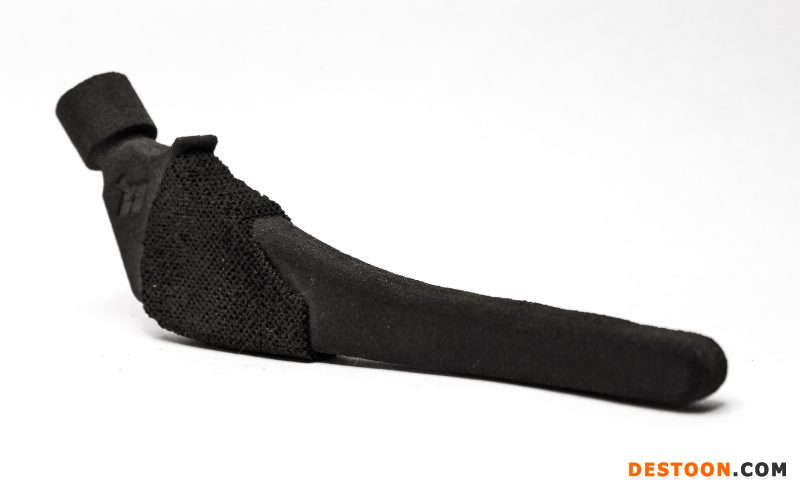 Objects printed using this technology can be up to 10 times stronger than parts made via fused deposition modeling (FDM). The CBAM-2 3D printer is able to print using sheets of 12 in x 12 in in size, but the company’s founder, Robert Swartz, envisions the ability to print parts as big as entire car hoods and speeds of up to 100 meters per minute.

Geometries are limited by what post-processing is required. Sand blasting would limit the complexity of the shapes, as interior geometries would be difficult to get to. Chemical processes allow for more intricate structures because excess material is dissolved away.

Though CBAM cannot make parts quite as strong as those fabricated using traditional composite manufacturing, it can likely make more complex components more quickly than those produced with traditional techniques. And it can do so without all of the manual labor involved.

The CBAM-2 is still new to market, having been launched in May 2019 with expected deliveries to take place in Q3 of this year. No news has yet been released about initial shipments, however. We do know that Impossible Objects’ flagship Model One system did go out to customers, including Ford Motor Company and Jabil.

Two of the former co-founders of Leapfrog 3D Printers, Lucas Janssen and Maarten Logtenberg, left the desktop 3D printing business to develop a large-scale continuous carbon fiber 3D printer. Setting up a company called CEADgroup, the duo worked to create something that was large, fast, reliable and capable of producing strong parts.

The result was continuous fiber additive manufacturing (CFAM), a process that, according to the company, can 3D print parts as large as 4m x 2m x 1.5m in size at a rate of 15kg per hour. The fast deposition rates are achieved through the use of an industrial extruder and hopper for processing plastic granules, as found in the injection molding industry. Matrix materials that can be printed so far include PET, PP, ABS and PEEK. Reinforcement materials are limited to carbon fiber and fiberglass, but the company hopes to expand to include optical glass, copper and steel fibers.

CEAD claims that CFAM is able to increase the strength of a part six-fold through the incorporation of continuous fiber reinforcement, but the exact nature by which reinforcement material is fed into the print has not yet been disclosed, leaving room for skepticism.

Arevo is a Silicon Valley startup (backed in part by the CIA’s In-Q-Tel) that has developed a laser-based method for printing with carbon fiber. The process deposits pre-impregnated continuous carbon fiber filament and simultaneously heats it with a laser before a roller compresses it onto the build surface.

The deposition head is mounted onto a multi-axis robotic arm, making it possible to 3D print in any orientation that best suits the design of the part, making up for or taking advantage of the anisotropy of the carbon fiber. Software developed by Arevo also enables design optimization through the use of simulation. 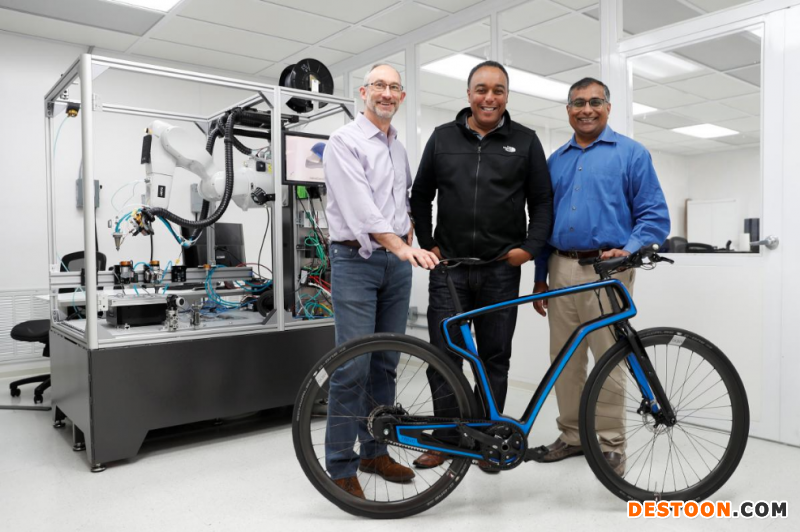 So far, Arevo has demonstrated the capabilities of its directed energy deposition (DED) technology by manufacturing bike frames for multiple companies. More recently, it partnered with Japan’s AGC to provide manufacturing-as-a-service.

Yet another startup developing a method for 3D printing continuous carbon fiber is Continuous Composites, based in Idaho. Its continuous fiber 3D printing (CF3D) method feeds a roll of dry carbon fiber into a printhead, mounted on a seven-axis industrial robot. Inside of the printhead, the fiber is impregnated with a rapid curing photopolymer resin and then extracted through the end effector and instantly cured with a powerful energy source.

Like the robotics of Arevo, the seven-axis arm allows the fiber to be oriented in anyway necessary to either overcome or utilize the anistropic properties of the material. Unlike Arevo, dry carbon fiber is used as the starting material, potentially improving the physical properties of the final part and opening up the variety of matrix materials available. Interestingly, the curing of the resin also allows the CF3D process to print in midair.

Continuous Composites is developing automated tool changing for swapping printheads loaded with different fibers and resins. Resins are being developed with potential customers, but so far the firm has created a durable, UV-resistant plastic with high glass transition temperature and a material that meets the smoke, fire and toxicity requirements of the Federal Aviation Administration.

As mentioned in our previous post in the series, chopped carbon fiber is weaker than continuous carbon fiber. However, Fortify is a startup that has found a unique advantage to the segmented nature of the material with its digital composite manufacturing (DCM) technique. 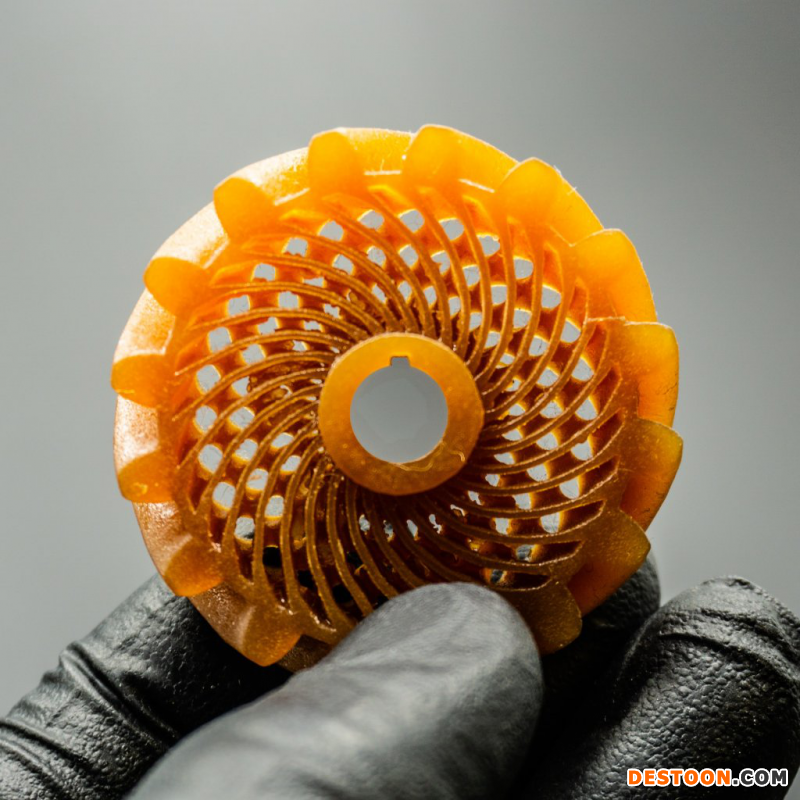 DCM is a novel take on digital light processing (DLP), in which a projector is used to cure photopolymer resin. In the case of DCM, the liquid is loaded with reinforcing additives, such as chopped carbon fiber, that are aligned using a magnetic field during the printing process.

In turn, it’s possible to orient the additive where necessary to achieve optimal physical properties throughout a part. DCM can produce parts with the same geometric complexity as standard DLP components, but with fewer support structures and greater overhangs.

So far, the company is still in the early stages, making parts for potential customers, but the reinforcement materials developed so far include carbon fiber, fiber glass and a high-temperature ceramic additive. In particular, the firm sees its technology as valuable for printing tooling for injection molding.

Outside of the startups mentioned in this series, there are more established companies and research institutes doing interesting things with carbon fiber. In 2016, EnvisionTEC (inventors of DLP) showcased a massive 3D printer said to be capable of 3D printing composites. However, we haven’t heard anything about it since then, so one wonders if it really exists. Stratasys was also, at one point, developing a method for carbon fiber 3D printing with Siemens, but there have been no updates on that front either.

Oak Ridge National Laboratory (ORNL) is also constantly working with the material, having already aided in the development of Big Area Additive Manufacturing offered by Cincinnati Incorporated. This process features rapid deposition of chopped fiber filled plastic to near-net-shape and was responsible for 3D printing a Shelby Cobra replica, as well as vehicles from Local Motors. Another version of this process has been created by Thermwood and Ingersoll was reported to be working with ORNL on an even larger system in 2016, but no updates have been given so far.

In this series, we’ve tried to give a broad overview of both the carbon fiber and its use in 3D printing. We may not have covered everything, so there may be developments out there that we have missed. Let us know and, hopefully, we’ll continue with this series!

Join the discussion of this and other 3D printing topics at 3DPrintBoard.com.