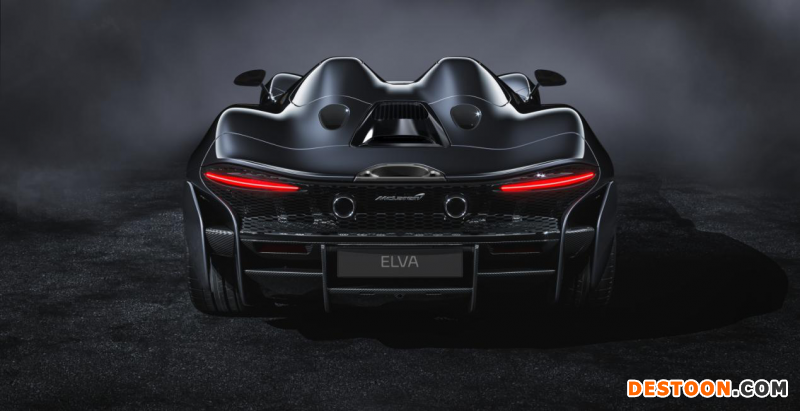 The Elva name celebrates the renowned Bruce McLaren-designed M1A and McLaren-Elva M1A [Mk I], M1B [Mk II] and M1C [Mk III] of the 1960s. Produced as ‘customer’ versions of the innovative and exciting Group 7 McLaren race cars, the McLaren-Elva sportscars embodied many of the pioneering design and engineering principles that are integral to the McLaren road cars produced today.

Mike Flewitt, CEO, McLaren Automotive:“McLaren continues to push the boundaries of supercar and hypercar development in pursuit of outstanding and unparalleled driving experiences for our customers, and the McLaren Elva epitomizes that pioneering spirit. The McLaren-Elva M1A [Mk1] and its successors are in many ways the true spiritual forerunners of today’s McLarens – superlight, mid-engined cars with the highest levels of performance and dynamic excellence. It’s fitting that the new McLaren Ultimate Series roadster – a uniquely modern car that delivers the ultimate connection between driver, car and the elements and with that new heights of driving pleasure on road or track – acknowledges our rich heritage with the Elva name.”

The new McLaren Elva is a fast open-cockpit; a two-seater with a bespoke carbon fibre chassis and body but no roof, no windscreen and no side windows. With every sensory input heightened, this is a car that exists to provide unparalleled driving pleasure on road or track.

A 4.0-liter, twin-turbocharged McLaren V8 from the same family of engines that powers the McLaren Senna and Senna GTR combines with the light vehicle weight to give the new Ultimate Series roadster performance, with high levels of acceleration, agility and driver feedback.

The low nose and pronounced front fender peaks provide visual drama and at the same time enhance forward vision. Large, carbon fibre rear fenders flow from the front of the door to the rear deck, while the height of the twin rear buttresses is minimized by using a deployable roll-over protection system.

Helmets can be worn if preferred, but the form and sculpture of the upper cabin wraps around the driver and passenger to provide a secure environment. A fixed windscreen derivative of the car is also available for most markets as a factory option.

A connection with the elements is integral to the McLaren Elva driving experience but that hasn’t stopped McLaren innovating, with the Active Air Management System (AAMS) to enhance driving pleasure. The system channels air through the nose of the Elva to come out of the front clamshell at high velocity ahead of the occupants before being directed up over the cockpit to create a relative ‘bubble’ of calm. The system comprises a large central inlet situated above the splitter, a front clamshell outlet vent and a discreet carbon fibre deflector that raises and lowers vertically; when the AAMS is active, the deflector is deployed at the leading edge of the bonnet outlet, rising 5.9in into the freestream to create a low-pressure zone at the vent.

The vented air is directed through a 130-degree radius, using a network of transverse and longitudinally mounted carbon fibre vanes across the bonnet outlet; distributing the airflow both in front of and along the side of the cabin further assists air management in the cabin environment. At urban speeds, when the level of airflow into the cabin means the AAMS is not needed, the system is inactive. As vehicle speed increases, the AAMS automatically deploys and remains active until speed reduces, at which point the deflector retracts. The system can also be button-deactivated by the driver.

Aesthetic and technical design in harmony

McLaren’s design philosophy intrinsically links aesthetic design and technical design, rather than separating the disciplines of design and engineering as is commonplace in the automotive industry. The AAMS is an example of the results of this harmonious approach, being integrated within the aerodynamic and cooling functionality of the McLaren Elva.

When the AAMS is inactive, the central duct is sealed, diverting air flow into the low-temperature radiators and increasing their cooling efficiency. To provide optimal packaging conditions for the AAMS, the McLaren Elva features twin low-temperature radiators (LTRs) positioned ahead of each front wheel. The new cores used in these LTRs contribute to the engine’s 804bhp power output by reducing charge air temperature and also cool the oil in the seven-speed seamless shift transmission.

In addition to housing the AAMS, the front clamshell features deep contours that guide air into a discreet duct in the leading edge of each carbon fibre door. This captured cooling air is then directed into the two rear-mounted, powertrain-cooling, high-temperature radiators (HTRs) located just ahead of the rear wheels. A second, lower duct that starts inside the front wheelarch also channels air through the bodyside to the HTRs, which are additionally fed through the visible main side intakes. Intakes on the rear of each buttress channel combustion air into exposed air filters under the tonneau, which feed the carbon fibre engine plenum.

The trailing edge of the bodywork features a full-width active rear spoiler, the height and angle of which are adjusted simultaneously to optimize aero balance. Airbrake functionality improves braking from high speeds, the range of operation varying according to whether the AAMS is active. The rear diffuser works in conjunction with the active rear spoiler. The McLaren Elva has a flat underfloor until the point by the rear axle at which the diffuser starts and increases in height to accelerate air out from under the vehicle. The diffuser features vertical ‘fences’ to guide the airflow without reducing the air evacuation path and these combine with the rear bumper side extensions to further improve the aerodynamic efficiency.

“Our mission with the McLaren Elva was to create an open-cockpit, two-seat roadster that delivers the most elemental of driving experiences. Formula 1-inspired shrink-wrapped volumes create a technical sculpture that is as striking as it is remarkable, the exterior flowing into the interior in a stunning example of a new and unique McLaren ‘blurred boundaries’ design principle that has allowed us to seamlessly bring the outside in to further enhance driver engagement while remaining true to our philosophy of making no compromises.”

There is no clear demarcation between the exterior of the McLaren Elva and the interior. The uppermost sections of the carbon fibre doors simply curve over and flow down into the cabin, the light, stiff and strong composite material providing the good properties to form such enticing shapes and forms. Complementing this design feature, the buttresses behind the driver and passenger also flow into the cabin behind the seats. While ensuring the driver and passenger remain exposed to the elements, the sculpture of the wraparound upper cabin environment enhances the feeling of security and protection within a cocooned interior.

A spar of carbon fibre additionally sweeps down from between the buttresses and runs between the driver and passenger seats to support a central armrest and cradle the engine start button and the controls for Drive, Neutral and Reverse functions. The seats themselves are of a bespoke design, with a new lightweight carbon fibre shell that not only supports the head, shoulder and back area of the occupants, but works with the upper shape of the cabin. The lower area of each seat is marginally shorter than a conventional McLaren seat, allowing enough space within the footwells for driver or passenger to stand should they want to in order to enter or leave the vehicle. The seats are available with different upper and lower colors and materials, creating a contrast between the exposed upper section and cocooned lower section. Six-point race harnesses can be selected should the customer wish to use the McLaren Elva on track.

Stowage space is offered beneath the rear tonneau. Crafted from carbon fibre, the curving single-piece panel is operated manually and secured with soft-close latches. It further reduces weight at one of the highest points of the McLaren Elva. The compartment under the tonneau has space for helmets and also houses the porthole-like panels that showcase the two visible air filters - a fine example of the McLaren design principle of exposing functional engineering.

Alternatively, customers can select a Gloss Visual Carbon Fibre Body, which exposes not only the carbon fibre body panels, but also the aligned twill of the composite material. This can be further enhanced with a range of color tints. McLaren Special Operations can also develop a bespoke tint for the exterior or interior carbon fibre.

The core of the McLaren Elva is – as with every McLaren road or race car since 1981 – a carbon fibre monocoque. This state-of-the-art ‘tub’ is incredibly strong and stiff, and its inherent properties mean an open-top roadster does not require any additional strengthening as would be the case with a vehicle built from aluminum or steel. Conversely, despite its rigidity, carbon fibre is also incredibly light, helping to reduce the overall vehicle weight.

To that effect carbon fibre has also been used extensively throughout the McLaren Elva. The entire body is carbon, and McLaren has pushed the limits of the material to not only create incredible sculpted forms, but to also reduce weight. The front clamshell, for instance, is just 1.2mm thick and meets all of McLaren’s structural integrity targets – yet it forms a one-piece panel that wraps around the entire nose of the vehicle and provides a clean, uninterrupted vision without any panel joins. The body side panels, which are each over ten feet long and stretch from the front wheels, past the side intakes, around the rear tonneau cover and all the way until the active rear spoiler.

Each door is constructed entirely of carbon fibre and features a single-hinge design, mounting to the vehicle just behind the front clamshell. The doors operate in a Dihedral function, a McLaren trademark. The floor within the McLaren Elva is exposed carbon fibre, once again highlighting the weight saving throughout. Practicality is enhanced with the use of non-slip material at selective points, or bespoke floor mats if preferred.

Carbon, too, forms the core of the braking system which is the most advanced ever fitted to a McLaren road car. Each sintered carbon ceramic disc measures 390mm and takes longer to produce than a conventional carbon ceramic disc, but the resultant material is stronger and has improved thermal conductivity. This allows the front brake discs in particular to be reduced in size, benefitting unsprung mass while still maintaining performance. Cooling requirements are lessened, reducing the brake ducting needed, which further reduces weight and improves aerodynamic efficiency. The braking system was first introduced on the McLaren Senna but is enhanced for the Elva with the addition of titanium caliper pistons which save a total of 1kg across the vehicle.