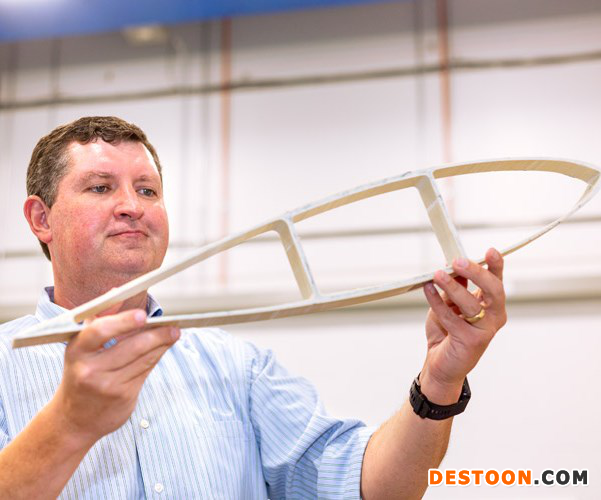 Dr. Todd Griffith, associate professor of mechanical engineering, demonstrates his blade design for an offshore floating wind turbine. Griffith is leading a team of UT Dallas researchers and collaborators to build a prototype for the turbine. Source | University of Texas at Dallas

University of Texas at Dallas (UT Dallas) associate professor of mechanical engineering Dr. Todd Griffith and his team have received a $3.3 million grant from the U.S. Department of Energy to develop a prototype of their floating offshore wind turbine design for converting deep-ocean winds into electricity.

The Department of Energy estimates that state and federal waters along the U.S. coasts and the Great Lakes could generate twice the amount of energy generated by all of the nation’s electric power plants combined. One of the biggest barriers to harvesting that energy has been the high cost of deploying wind turbines in deeper water, where floating platforms are required. Griffith’s project aims to lower the cost and overcome challenges with installation and connecting to existing energy grids with underwater cables.

Griffith’s vertical axis wind turbine design, unlike traditional three-blade horizontal axis wind turbines, calls for vertical blades standing upright on a platform that sits partly above the ocean’s surface and partly below. The platform is attached to the sea floor with cables, rather than anchored directly to the sea floor, under ocean depths of at least 200 feet.

According to the design, the turbine blades would rise between 600 feet and 700 feet above the ocean’s surface, but could reach as high as 900 feet.

Under the new grant, the UT Dallas team will include doctoral students, postdoctoral researchers and Dr. Mario Rotea, the Erik Jonsson Chair and head of mechanical engineering, who will lead the control systems thrust of the project. Through a process called control co-design, Rotea said he will work on developing the subsystems required to extract the most power with the least exertion of the turbine, which includes managing the forces on the blades and the turbine’s speed in changing weather conditions.

The research is critical to expanding the use of wind energy in the United States, especially in coastal areas, according to Rotea. The nation’s only commercial offshore wind project, which came online in 2016, is the Block Island Wind Farm about 4 miles off the coast of Block Island, Rhode Island.

UT Dallas researchers are working with the University of Illinois at Urbana-Champaign and corporate partners Aquanis Inc., VL Offshore and XFlow Energy.

“For me, this is an opportunity to do great research with a great multidisciplinary engineering team,” Griffith says. “We’re bringing together structural design, aerodynamics, control systems, floating systems, economics and installation procedures. It’s a true systems-level engineering problem. I’m just excited to be able to lead this incredible group to bring all this technology together to realize the vision of the ATLANTIS program.”（来源：University of Texas at Dallas）